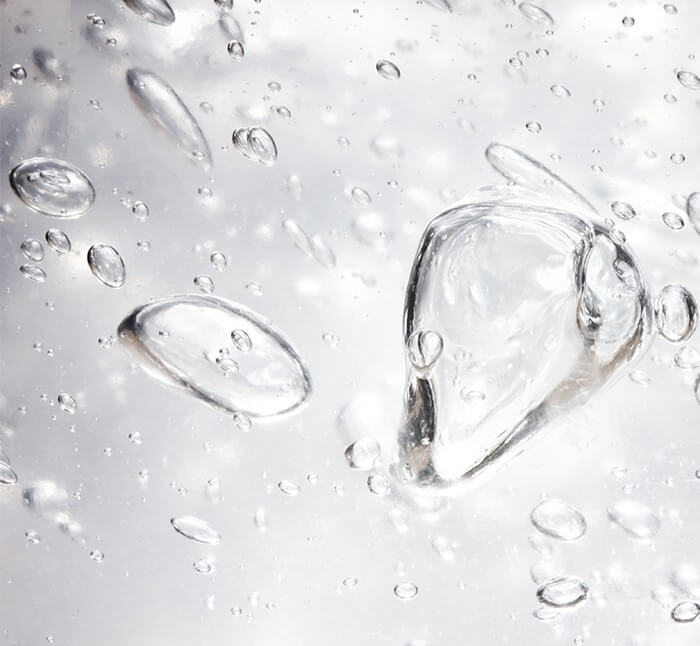 Rich in polysaccharides derived from yeast, it prevents puffy eyes and dark circles: reduce the volume of bags under eyes by protecting and enhancing the capillary blood; lightens the color of dark circle by its action on the hyperpigmentation of suborbital area.

ACTIFLOW® is an active ingredient rich in polysaccharides derived from yeast with anti-dark circles properties. The dark circles are formed due to the combination of several factors such as the loss of hemodynamic properties characterized by a slowdown in blood flow or hyperpigmentation responsible for an accentuation of the color of the skin. For use against vascular stasis which promotes the appearance of dark circles, ACTIFLOW® remodels the capillary network by stimulating neovascularization and increases its resistance thanks to its richness in vitamin PP.

ACTIVFLOW®: protects and strengthens the blood capillary network. On one hand, ACTIFLOW® increases the resistance of blood vessels, thanks to its richness in vitamin PP. On the other hand, ACTFLOW® strengthens the capillary network, promotes its restructuring and improves its organization by acting indirectly on neovascularization. Indeed, tested at 2% on culture of human keratinocytes, ACTFLOW® increases the synthesis of VEGF, a growth factor of the vascular endothelium.

ACTIFLOW® acts on hyperpigmentation of the suborbital area. Hyperpigmentation around the eye is one of the factors involved in the appearance of dark circles. This accentuation of the color of the skin is due to the presence of melanin, blood and sometimes ferric pigments among others. ACTIFLOW® 4% formula significantly lightens the color of dark circles after 28 days of use.

In vitro study on endothelial cells:

By participating in the formation of new vessels from the existing network, ACTIFLOW® "promotes the restructuring of the capillary network and improves its organization. A study carried out on endothelial cells allowed visualization by immunostaining of the ramifications and tubular structures of new vessels formed in the presence of ACTIFLOW® ". 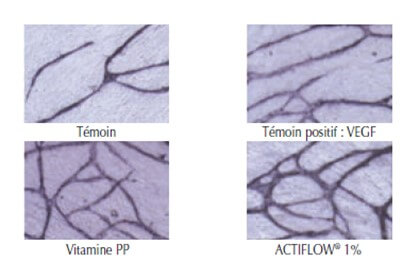 Study on the keratinocyte synthesis of VEGF using ELISA method:

After 28 days of twice-daily application, 75% of users of ACTIFLOW® "show an improvement in the creaminess of the cream compared to placebo, whatever the type of formulation.

There is a significant increase of 3.2% of the parameter L ', representative of the clarity of the skin.

In order to confirm the anti-darkening effect of ACTIFLOW® tested at 4%, a colorimetric study measuring against placebo the difference in color between the dark circles and non-skinned areas (rest of the face) was used to evaluate the skin color. uniformity of the complexion over 16 volunteers with an average age of 51 ± 3 years.

After 28 days of use, it is noted that ACTIFLOW® reduces the color of dark circles compared to placebo. ACTIFLOW® tends to standardize the color differences between the tops and the rest of the face.

Sometimes hereditary, dark circles and bags that appear rises on the suborbital zone are accentuated by the fatigue, stress and lifestyle and are partly related to poor blood circulation. To remedy this and improve skin microcirculation, We recommends ACTIFLOW®. Active from yeasts, ACTIFLOW® increases resistance capillaries, thanks to its contribution of vitamin PP and creates neovascularization by stimulating the synthesis of avascular growth factor: VEGF. ACTIFLOW® thus facilitates blood circulation in the level of the eye area, it decreases congestion vascular system and reduces the appearance of dark circles and pockets. The eye contour appears rested, the complexion more uniform. Recognized by 75% of users as an anti-dark circles ingredient, ACTIVELOW® is perfectly tolerated and can be incorporated into all eye contour treatments.